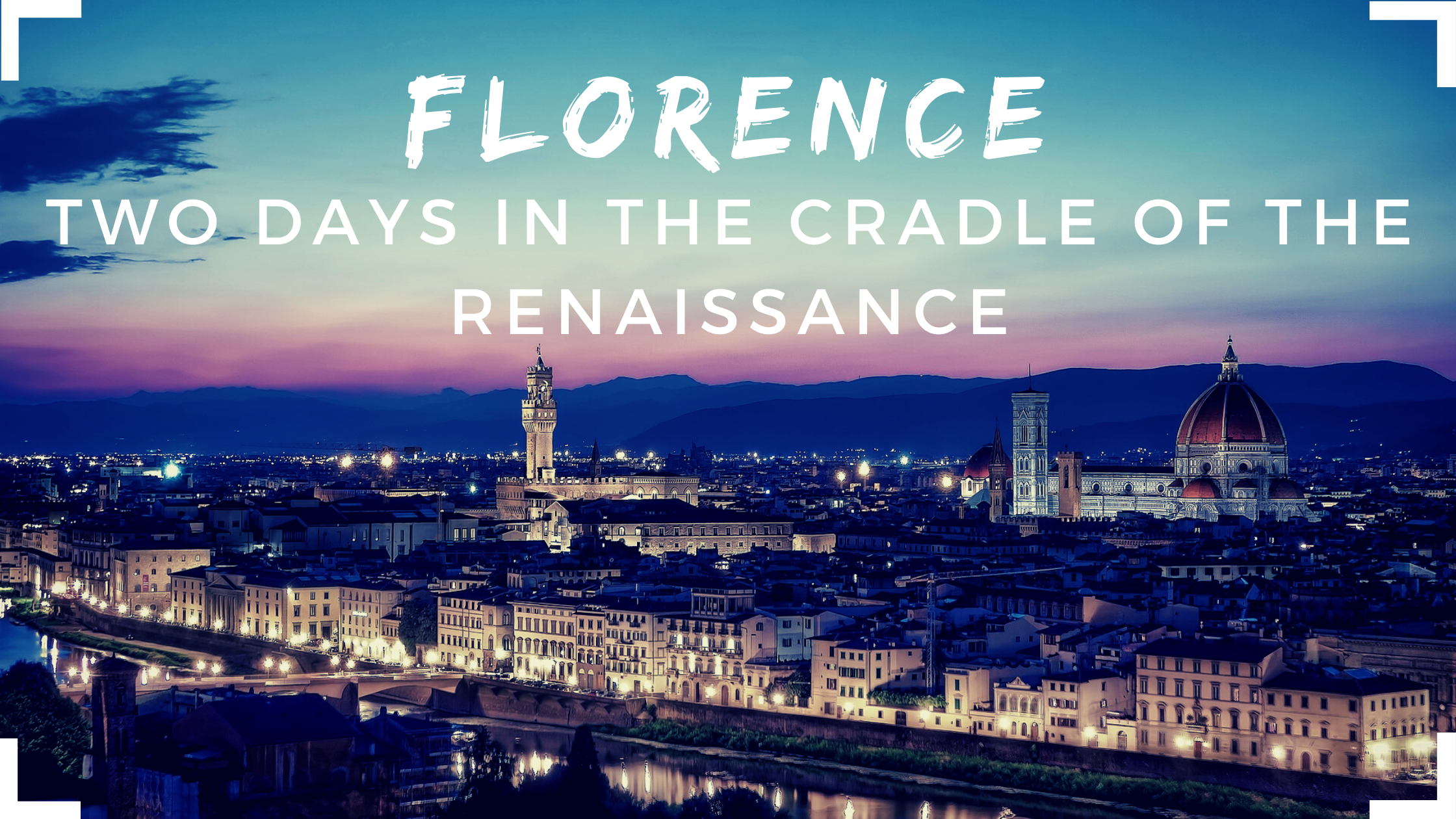 The best experiences for two days in Florence

Florence is one of the best-known and most appreciated Italian destinations in the world. All these thanks to its history and its priceless artistic and cultural heritage.

In this article, we will take you to discover the cradle of the Renaissance, Florence, the capital of Tuscany, and one of the symbolic places of Italian history.

It will be the difficult year that we leave behind, but with the days starting to get longer and the good weather advancing, we increasingly feel the need to explore new destinations. Our Italy offers us unique cities of art with a priceless heritage, envied and admired all over the world. Among these cities we find the magnificent Florence.

Known as the “Cradle of the Renaissance”, Florence is a magnificent treasure trove of history and works of art. During the Middle Ages and the Renaissance, in fact, the city boasts the presence of countless prominent personalities. Just think of Dante Alighieri, Leonardo da Vinci, Sandro Botticelli, Michelangelo and many others. The prestige that the city has acquired over the years is due to the Medici family who ruled the city from the fifteenth century until the eighteenth century.
Furthermore, the Florentine courts were a real factory for artists and for the powerful: in fact, the Florentine duchy was among the most powerful entities in Italy thanks to the banking families who lived here. In fact, the skills of bankers of various families such as that of the Medici and the Pazzi, made Fiorenza a rich and cultured city.

Thanks to these families, today we can admire real works of art: starting from the outside and arriving inside each building we can admire timeless beauties. The best way to discover all the corners of this wonderful city is with a guided tour, especially if done at dawn: you will not meet anyone in the city and you can admire glimpses, panoramas and observe details that will leave you breathless. Furthermore, you will discover which are the “must see” places that you absolutely cannot miss!
While planning your trip to Florence, however, we give you a taste of these places and the wonders that await you.

Our itinerary starts from a historic building, located in Piazza della Signoria, dominated by the Arnolfo Tower. We are talking about…

This building has undergone various transformations over the years and the peculiarity is that they are visible to all. Built in 1300 by the architect Arnolfo di Cambio, this place was, and still is, destined to be the political center of the city of Florence.
Over the years, it also became the home of the families who ruled the city, also hosting the Medici family.
It became the center of power under the Duchy of Cosimo I de ‘Medici, who together with his wife Eleonora da Toledo and their children moved to the Pitti Palace.

The succession of the Lordships made Palazzo Vecchio a real treasure for art lovers. Inside, in fact, it is possible to visit during a guided tour, the apartments of Eleonora, as well as the majestic “Salone dei Cinquecento” where the marbles of Michelangelo and the frescoes of Leonardo and Michelangelo are housed.

Nevertheless, a small pearl inside the palace is the Studiolo di Francesco. You will find it in a corner of the Salone dei Cinquecento, and inside you will discover that not all paintings are what they seem. Will there be any secret passages?

As we mentioned earlier, Palazzo Vecchio was and still is the center of government. You may be wondering how it was possible to have government offices inside this building. To obviate this thought, it was decided to build a structure, connected to Palazzo Vecchio by a suspended corridor, called …

In addition to being one of the most visited places in the world, today it is a wonderful museum, full of works of art dating back to different eras. Over the years it has undergone several renovations that have made it what we can admire today.

We can get lost inside for hours, but at the same time we can admire and experience the ingenuity of Giorgio Vasari in the construction of the stairs that connect the ground floor with the other two floors of the building.

Going up the stairs you can also meet the famous Francesco’s Cabinet, which today hosts temporary exhibitions until you reach the second floor where you will find yourself catapulted into the Florence of 1300. From here begins the real journey inside the Uffizi Galleries and, if accompanied by a tour guide, you will be able to learn all the secrets that lie behind works, such as the Madonnas by Giotto and Cimabue, the magnificent Venus by Botticelli, and in Leonardo’s Adoration of the Magi.
Be careful not to miss Michelangelo’s Tondo Doni, the beautiful work of Piero della Francesca dei Duchi d’Urbino, or the Medusa by Caravaggio, not to mention Rosso Fiorentino, Pontormo, Gherardo delle Notti and many other artists who are exhibited at this museum.

The Uffizi Gallery will allow you to get lost in the midst of so much art: this museum is an authentic gem in Italy. It preserves some of the works that have profoundly marked the history of art and will tell you an unforgettable story.

While we were telling you about Palazzo Vecchio, however, we mentioned a new house for the Medici family, connected to Palazzo Vecchio and the Uffizi by a particular corridor called the Vasari Corridor. The family’s new home also featured beautiful gardens. We are, therefore, talking about the

This stupendous palace, located in the Florentine Oltrarno, was bought by the Pitti family in the sixteenth century, to establish the residence of the Medici family.

Over the years, there have been numerous interventions that have changed its size and importance. In fact, two wings have been added to the main complex, precisely to house the apartments of the great Medici dynasty.

Today, it houses some of the most important museums in the city: inside it is possible to find the Palatine Gallery, where accompanied by a tour guide you can meet spectacular works, including some important paintings by Raphael.

Palazzo Pitti also houses the Museum of Fashion and Costume where you can admire the splendid costumes that have made the history of Italian fashion from the 18th century to today. A peculiarity? You can visit this museum as many times as you want, but each time you will discover new pieces as they are exhibited in rotation, to ensure their conservation.

Last, but not least, we cannot fail to mention the gardens of the Pitti Palace, known as the Boboli Gardens. Considered a real open-air museum built by the Medici family. This place became a model to follow for the so-called Italian gardens, where the green surface is divided into regular sections.
The Garden is now populated with ancient statues, full of fountains such as that of Neptune and the Ocean, and particular caves. After the Medici period, the Boboli Gardens experienced a great development thanks also to the Lorraine and Savoy dynasties, which made it the splendor that we can still admire today.

It was the dynasty that followed that of the Medici, the Lorraine family, which promised the first to protect the city of Florence and all its works of art. In fact, to keep this pact true, they decided to restore the Academy of Fine Arts in Florence, also building a gallery to house some Florentine works. We are talking about the birth of the

This museum was born with the aim of hosting one of the most important statues in history: the wonderful David by Michelangelo.

Inside the Gallery, it is now possible to admire seven statues by the famous sculptor and more. Together with a tour guide, in fact, you will be able to appreciate the priceless works of art by Botticelli, Filippo Lippi and many other important painters.

In addition, in a dedicated wing, there is the Museum of Musical Instruments. Some of the ancestors of today’s instruments are housed here. In fact, we can find an ancient harpsichord, or one of the very few Stradivari violins. This violin is still perfectly capable of playing. It is a real pearl housed within the Gallery.

We are almost at the end of our Florentine itinerary. Lastly, we would like to accompany you together with our tour guide inside a museum full of meanings, intrigues and mysteries, namely the

The Medici Chapels Museum is part of the San Lorenzo complex, a few steps from the Central Market.

Inside there are the New Sacristy, the Chapel of the Princes and the Crypt.
The Crypt is the place of eternal rest of the Medici Grand Dukes and their families, where you can also find the remains of the Lorraine family and the funeral monument dedicated to Cosimo the Elder. Accompanied by your tour guide you will discover all the intrigues that lie behind the people buried here. Suspicious deaths and rare diseases struck the Medici and Lorraine families.

On the other hand, the New Sacristy also houses the tombs of some illustrious figures of the Medici family, such as Lorenzo the Magnificent. The peculiarity of this environment, however, is hidden in the statues of him. The Sacristy was in fact designed, conceived and sculpted by Michelangelo. His genius is in fact admirable in the wonderful works of Night and Day to give you an example.

Continuing in the discovery of the Museum of the Medici Chapels, you can admire the majesty of the Chapel of the Princes. Here there are no tombs but epitaphs and funeral monuments. The characteristic of this environment is the opulence of the marbles and the color that surrounds you: in fact, all the marbles available in Tuscany were used for its creation. It was a real active work together with the Opificio di Firenze to create such a grandiose environment.

In conclusion, below you can find some places, which we talked about in one of our past articles that you can find HERE, where you can eat and sleep.

In conclusion, our journey to discover the wonderful Florence has now come to an end. We hope that our advice will allow you to spend two unforgettable days. Don’t forget to share your adventures with us and if you are looking for other ideas for activities and experiences you can visit our BLOG.