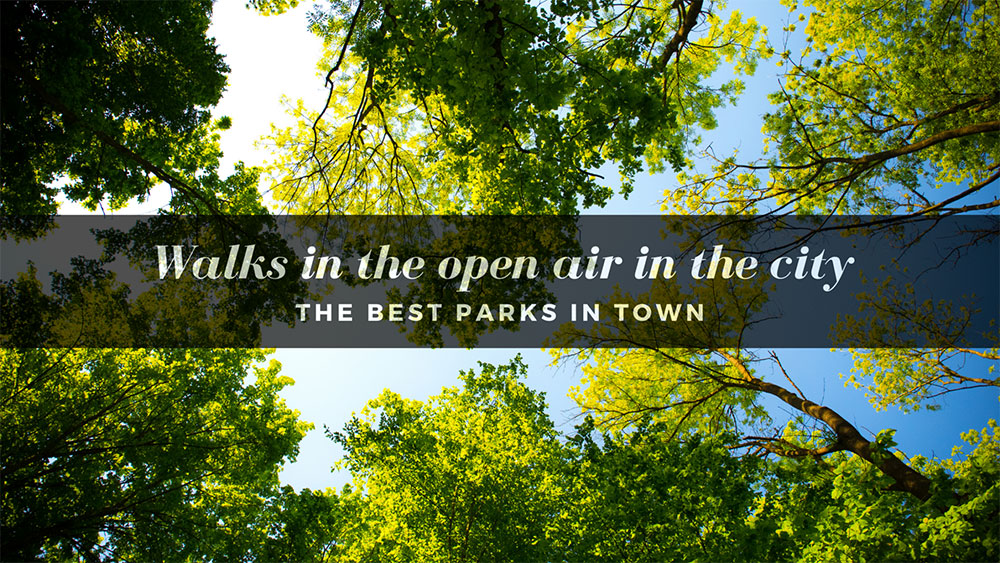 Our cities offer many city parks, as real “green lungs”, where you can walk, play sport and be surprised by the beauty of nature.

Are you curious to discover the best city parks where you can spend some free time? Find out with us!

Last year was not easy. We stayed at home, going out only for urgent reasons, reminding us how precious and liberating a walk outdoor can be.

When someone says that to breathe clean air and admire nature we have to move away from cities, it is not always true.

Milan, Turin, Florence and Rome are places that host not only historical and artistic heritage ready to be admired. In these cities we can also find many city parks, as real “green lungs”, where you can take walks and appreciate the nature that surrounds us.

Hereafter, there is our selection of the most important city parks not to be missed:

The most important green zone of Milan

Located in the central area of ​​the city of Milan, Sempione Park is considered the most important city park of the city. It is a huge green area that extends from Sforza Castle until Arco della Pace, for a total of 47 hectares.

Its construction dates back to the 1890s, following the typical style of English gardens, consisting of streams, tree-lined avenues and short hills.

Once, it had the function of a parade ground because it was located in a strategic position, near the Sforzesco Castle. Furthermore, in the early 1900s, it hosted the first Universal Exposition in Milan.

Inside the park, you can also find an artificial lake. Furthermore, another element that distinguishes this place in its uniqueness is the presence of several well-known buildings. Just think of the Milan Triennale, the Civic Aquarium and the Civic Arena, which find their home here.

Today, this place is considered a relaxing oasis, where both Milanese and tourists visiting Milan can find a peaceful corner away from the traffic and chaos of the city.

There are also legends and ghost related to this place…

A legend tells that in the late 1800s, a boy named Alvisio, returning from an evening spent with some friends, decided to cross the park at night. Suddenly at his side, he found a splendid veiled lady dressed in black. They began to talk and she invited him to spend the night in her wonderful villa, located inside the park. Alvisio accepted and the next day the lady disappeared.

It’s said that under her veil, the lady didn’t hide a beautiful face but a skull. No one has ever managed to find the mystery villa. Centuries have passed since then and no one has ever met the veiled lady of the Sempione park.

The first public city park in the heart of Milan.

In Porta Venezia district, in the central area of Milan, stands the first real public park in Milan: the Indro Montanelli Public Gardens.

This place was inaugurated in the late 1700s by the Austrian Habsburg family, who ruled the city at that time. They asked Giuseppe Piermarini to create a park for the entertainment of Milanese citizens.

The project was entrusted to Emilio Alemagna, who created a garden following the classic canons of the French garden.

Originally, this place also housed a zoo, now closed to the public. Among the important buildings that we can still admire inside, we can find the Ulrico Hoepli Civic Planetarium, Dugnani Palace and the Civic Museum of Natural History.

During the years, this green lung was called in different ways, from “Porta Venezia gardens” or “Via Palestro gardens”. Since 2002 this place takes its name from the famous Italian journalist Indro Montanelli.

If you are curious to discover our activities in Milan, click HERE.

The most famous public green lung of Turin.

The most famous public park in the city of Turin is absolutely the Valentino Park.

Located on the bank of Po river, its birth dates back to 1600 thanks to the Savoy family. In fact, it owes its name to the Valentino Castle, their summer residence in the city, which is located inside the park.

Nowadays, Valentino Castle has been included in the Royal Residences of Savoy, a Unesco World Heritage Site since 1997.

In addition, walking through the various paths of this green area, we can find a medieval village, accessible thanks to a drawbridge. Here you can still breathe a fairytale and magical atmosphere.

The famous Rocky Garden is nice to discover by walking without a specific destination. You will admire the surrounding nature and you will find benches with unique works of art that follow one another along the way.

Today the Valentino Park stands out for its precious natural heritage, consisting of a rich flora and a diverse fauna. For birdwatchers, in fact, it is possible to admire different types of birds.

To conclude, this city park is today the ideal destination for Turinese people and not only. Here they can switch off and relax, some with a simple walk, some practicing sports. The perfect place to admire some nature while staying in the city center.

Do you want to discover the city with a guided walking tour? Then click HERE!!!

One of the largest urban city parks in Europe, which hosts the famous Borghese Gallery.

One of the largest urban parks in Rome and Europe is Villa Borghese. Developed over a large area of ​​about 870 hectares, it was once owned by the Borghese family, but at the beginning of the 1900s it was acquired by the Italian Government, which decided to open it to the public.

Considered as the great example of the perfect union between nature and art. In fact, walking inside this typical Italian garden, you can find a succession of buildings, monuments and works as well as fountains, ponds but also a dense flora and fauna.

Among the most evocative places to visit places in this green area, far from the chaos of the city, we find the Garden of the Lake, where you can rent a boat and enjoy the park from a different and unique perspective; also the Sundial with its Secret Gardens; the Parco dei Daini and, finally, the Borghese Gallery. This museum hosts unique and very important pieces of art. In fact, you can admire works by artists, such as Tiziano, Raphael and Caravaggio.

One of the largest city parks of Rome as well as the house of the official representative office of the Italian government.

The third largest city park in the capital is Villa Doria Pamphilj. Inside, the park houses the official representative office of the Italian government.

Spread over an area of ​​184 hectares, this enchanting place was originally the country estate of the noble Roman family of the Doria Pamphilj.

Considered a real “Garden of Wonders”, walking through the tree-lined avenues, you can admire the wonderful buildings of the 1600s, but also the Italian garden enriched by fountains, waterfalls and lakes.

Nevertheless, the most suggestive place is certainly the Casino del Bel Respiro, where, enchanted by the vegetation, it seems to be in a place of open countryside and not in the city center. In fact, at the time of its construction, this area was considered “out of town”.

There are many secrets that lie behind this place: one of them is the tunnel, born as an escape route for the Popes, a kilometer and a half long that connects the Casino to the Vatican City.

In short, a real refuge for those who are looking for a moment of relaxation away from the chaos of the city.

If you want to combine a guided walking tour of Rome with a tour guide, click HERE!!!

The largest green area in the heart of Florence.

In the cradle of Renaissance is located Parco delle Cascine, the largest public park in the city of Florence.

This real green lung developed on over 130 hectares is located a few steps from the city center.

It was born as an agricultural and hunting estate of the Medici family. In 1791, after a few years of drainage works commissioned by the Grand Duke of Tuscany Pietro Leopoldo D’Asburgo Lorena, it was finally opened to the public.

Even today, we are lucky enough to be able to visit this enchanting oasis of peace that runs parallel to the Arno river. Furthermore, today the Parco delle Cascine is home to a great variety of vegetation and fauna.

To conclude, this city park is the ideal place to spend free time in close contact with nature. The opportunity to take a yoga class, walk, run or cycle makes this area one of the best choices for Florentines. It also houses the Faculty of Agriculture.

If you are curious to find out the secrets of Florence, click HERE!!!

We have seen how our Italian cities offer us opportunities where we can spend our free time outdoors just a few steps from the center.

Have you ever been to these city parks? Which city parks do you prefer?