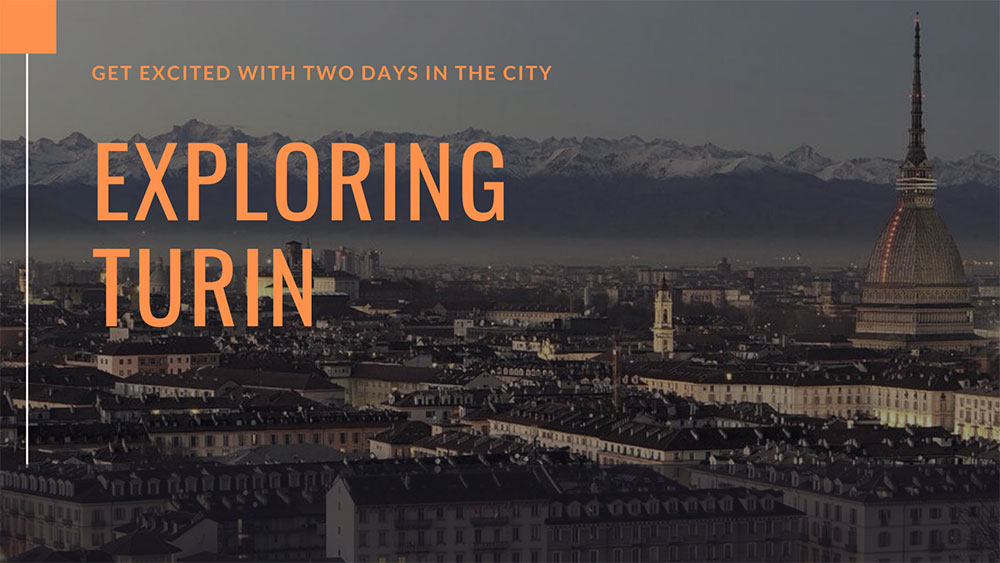 The best experiences for two days in Turin

The summer is almost upon us and the desire to spend two carefree days discovering new destinations is gaining ground. In this article, we will take you to the discovery of Turin, the capital of Piedmont and one of the symbolic places of Italian history.

With the days starting to get longer and the good weather advancing, we increasingly feel the need to explore new destinations.
Our Italy offers us unique cities of art with a priceless heritage, envied and admired all over the world.

Turin, emblem of the Liberty style, is the ideal city to explore all year round, but especially during the beautiful spring days. We are, therefore, talking about a two-thousand-year-old city since its foundation dates back to the third century BC and has had the opportunity to actively participate in Italian history.

Originally, during the Roman rule it was known as Iulia Augusta Taurinorum. It was then conquered by the Ostrogoths, becoming the capital of a Lombard and Carolingian Duchy.

Turin has also been a protagonist in recent times. In fact, in 2006 it was the place where the XX Olympic Winter Games took place.

Moreover, it is also the birthplace of some symbols of Made in Italy. In fact, since 1899 Fiat, the hub of the Italian automotive industry has been based in Turin.
Here the famous and tasty gianduja chocolate is produced, better known as Gianduiotto. You can find it handcrafted in all the bars and cafes of the city. Tasting it is one of the things to do absolutely during your stay.

If after enjoying a little whim of gluttony you are looking for a symbolic place of Turin to visit at least once in your life, the Egyptian Museum is the right place for you.

The Museum of Egyptian Antiquities in Turin is housed in the Palazzo dell’Accademia delle Scienze. We also talked about it in our article which you can find HERE. It is a seventeenth-century palace that houses the most important Egyptian antiquities museum in the world, after Cairo. We recommend a guided tour inside to discover the wonderful finds preserved here. In fact, there are more than 6,000 works preserved inside, divided between sarcophagi, mummies, amulets, statues, doors, funerary objects, everyday objects and many other jewels. The museum houses works that cover a period that starts from the Paleolithic up to the Coptic era: a real excursus of Egyptian history.

If you still want to continue exploring the city, a guided evening tour of Turin will surely be for you.
You can admire, together with your tour guide, the symbolic places of the Turin city. You will stroll along Corso Garibaldi, admire Piazza Castello and be enchanted by the majesty of the Mole Antonelliana.

But with regards to Mole Antonelliana…

Did you know that inside it houses the Museum of Cinema?
The building, 167.5 meters high, takes its name from its designer: Alessandro Antonelli. We are talking about the emblem of Turin, with its dome that dominates the Turin landscape.
The National Cinema Museum, housed inside the Mole, is one of the most visited museums in Savoy city and is the only example in Italy of a museum dedicated to this type of art. You can discover paintings, photographs, posters, equipment of Italian and international sets.

Also, if you want to discover the Cinema Museum together with one of our guides you can send us an email by clicking HERE.

Another wonderful building to visit once in Turin is the Royal Palace which, inside, houses the Chapel of the Holy Shroud.

The Royal Palace is one of the most important Savoy residences. It is the first residence as it was, in fact, built in the sixteenth century right in the city center, near Piazza Castello. In its heyday, it was the symbol of the power of the Savoy and was the scene of the political and social life of the Kingdom of Sardinia. One of the most enchanting areas in the palace is the magnificent Royal Armory, as well as the apartments of the Prince of Piedmont.
The Chapel of the Holy Shroud is located within the museum itinerary of the Royal Palace, where we recommend going along with one of our tour guides.
Furthermore, the construction of this chapel was completed in 1694 and since then it has faced various ups and downs such as the fire between 11 and 12 April 1997 which required restoration.

To conclude the exploration of the history of Turin and its surroundings, we cannot fail to mention the Reggia di Venaria.

The Reggia di Venaria has been a UNESCO World Heritage Site since 1997 and was designed by Amedeo Castellamonte.
This Savoyard residence will amaze you with its perfectly preserved elegant and luxurious furnishings. With a professional guide, you can walk through the enchanting Diana’s Hall and the Galleria Grande.
The place where the Royal Palace stands was chosen by the rulers on purpose: it is located, in fact, at the foot of the Lanzo Valleys, with its extensive woods, an ideal place for hunting. Finally, of great interest and rare beauty are its gardens: colorful, particular, decorated; it is a pleasure to be able to enjoy a spring afternoon getting lost among the many species of plants and flowers present.

Finally, below you can find some places, which we talked about in one of our past articles that you can find HERE, where you can eat and sleep.

Our journey to discover the wonderful Turin has now come to an end. We hope that our advice will allow you to spend two unforgettable days. Don’t forget to share your experiences with us and if you are looking for other ideas on activities and experiences you can visit our BLOG.