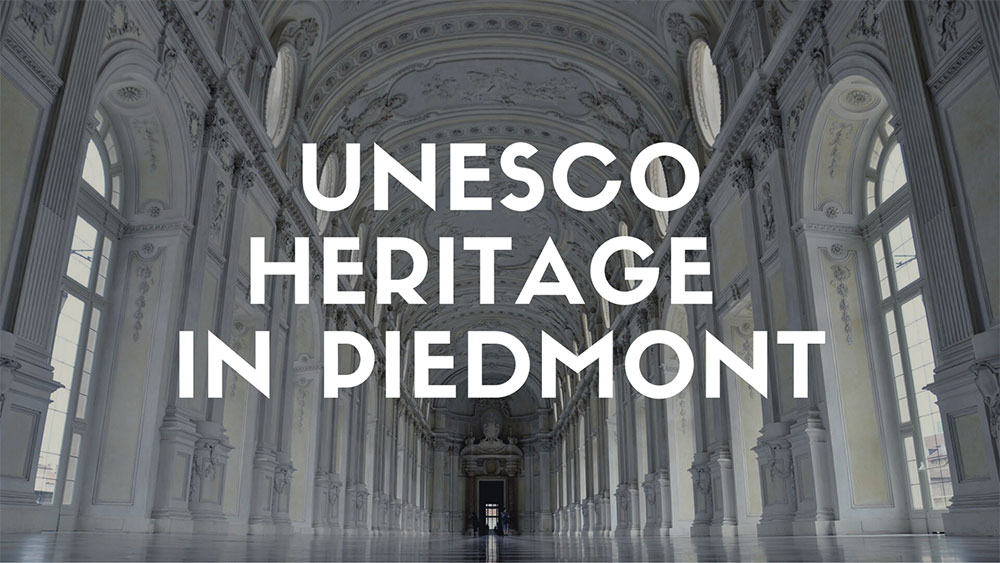 The Unesco Heritage in Piedmont

Thanks to its history and landscape, Piedmont hosts five Unesco Heritage Sites.
In this article, we will discover these wonderful place.

Unesco was created with the aim of identifying, protecting, safeguarding and transmitting to future generations, the cultural and natural heritage of the whole world.

In addition, Piedmont accommodates a total of five Unesco World Heritage Sites that include not only historical and cultural beauties, but also landscape places of unique splendor.

Hereafter, the list of the Unesco World Heritage Sites located in Piedmont.

The wine landscapes of the Langhe-Roero and Monferrato, Unesco Heritage since 2014, are split within the areas of Alessandria, Asti and Cuneo.

Expanses of hills covered with vineyards, hazelnut plantations, ancient villages, historic and secular cellars, medieval castles. They are part of the distinctive elements of this area, as well as the result of the combined action of man and nature.

These amazing landscapes are divided into five distinct wine areas and a Castle. They are: Langa del Barolo, the hills of Barbaresco, Nizza Monferrato and Barbera, Canelli and Asti Spumante, Monferrato degli Infernot, the Grinzane Cavour Castle.

The Piedmontese wine culture is one of the characteristic elements of this region. In fact, the excellence and innovation in the cultivation processes have ensured over the years the production of fine wines that are appreciated worldwide.

Neverthless, the best way to discover this area is by car as you have the chance to wander around it and be amazed by its scenic beauty.

In addition, you absolutely have to participate in a wine tasting of excellent Barolo wines in a local cellar located in Serralunga d’Alba.

Residences of the Royal House of Savoy

The Residences of the Royal House of Savoy located around Piedmont have been registered on the Unesco World Heritage List since 1997.

In 1563, the Duke of Savoy Emanuele Filiberto, made Turin the capital city of his duchy. He decided to launch a territorial reorganization project with the aim of celebrating the power of the Savoy family.

Over the years, his successors followed his example because they centralized all administrative, political and cultural power in the city of Turin. As a matter fo fact, they constructed new residences and renovated the existing ones.

During the 18th and 19th centuries, the Savoy family acquired new estates in decentralised areas outside the city. The aim of those residences was alternating moments of work with moments of pleasure and leisure.

Each of these residences is characterized by different attributes, as all of them offer an extraordinary testimony of the power of the House of Savoy as well as the history of Piedmont.

Among the many Savoy royal Residences, we absolutely have to mention Reggia of Venaria, the Royal Palace of Turin and the Royal Estate of Pollenzo.

The Reggia of Venaria is considered one of the greatest masterpieces of the Baroque period. It was built by Amedeo di Castellamonte in the mid-seventeenth century, as a hunting lodge for Carlo Emanuele II.

Over the years, expansion and embellishment works were carried out, thanks also to the hand of famous artists such as Filippo Juvarra.

Moreover, to discover in the best way possible the Reggia of Venaria, we recommend that you take a guided tour. Together with a local tour guide, you will have the chance to discover all the secrets of this palace of indescribable beauty.

The Royal Palace of Turin with its museums is also included among the Savoy residences, now a UNESCO World Heritage Site. It was considered the symbol of the power of the House of Savoy. In fact, the court and government of that time resided in these rooms.

Even today you can admire the famous Hall of Mirrors, as well as the magnificent Royal Armory. It’s possible to find out the secrets and beauty of the Royal Museums by participating in a guided tour. A licensed tour guide will accompany you, step by step, into the world of the House of Savoy.

To conclude, the Royal Estate of Pollenzo was created thanks to the figure of Carlo Alberto.

The purpose of this place was hosting the general management of the Savoy. In fact, he understands the agricultural potential of the place, creating a farm with vineyards and cellars and giving a new image to the village.

The deep link with this place remains tangible even with his successors: for example, Vittorio Emanuele II often used the title of “Count of Pollenzo“.

Today, the entire complex hosts the University of Gastronomic Sciences, the Wine Bank and also a luxury Hotel.

If you are curious to find out what experiences we can offer you about the Residences of the Royal House of Savoy, click HERE and have fun choosing your favorite activity!

Sacri Monti of Piedmont and Lombardy

The Sacri Monti of Piedmont and Lombardy were registered in the list of World Heritage Sites by Unesco in 2003.

This area is dated back to the end of the 16th century and the beginning of the 17th century. It includes nine separate complexes located in the mountains of northern Italy, between Piedmont and Lombardy.

Firstly, these places were created with the aim of celebrating the Christianity religion in Europe through places of culture composed of chapels and religious monuments, as a sort of alternative to the pilgrimage to the Holy Land, not easily accessible by anyone.

Secondly, their architectural complexes are distributed along the slopes of a hill and lead visitors to follow a sort of physical and spiritual path. A real pilgrimage through a symbolic itinerary composed of monumental stations that make the natural space sacred.

To conlude, this project is the result of a great landscape architecture plan, where the nature and human work are mixed in a harmonious and unique style. Furthermore, it’s extraordinarily integrated into the surrounding nature made up of forests, lakes and hills.

Among the Piedmontese Sacred Mountains we find those of Belmonte, Crea, Domodossola, Ghiffa, Oropa, Orta and Varallo.

A visit to these places is certainly worthwhile. In fact, it seems to be catapulted into a place with a magical and unique atmosphere that will not leave you disappointed.

The recent recognition of Ivrea as an “Industrial City of the twentieth century” is due to the figure of Adriano Olivetti. It has been included in the list of Unesco World Heritage Sites in 2018.

Ivrea was founded in the early 1900s. The period of greatest development took place between 1930 and 1960, when the famous Olivetti company produced typewriters, calculators and other office accessories.

The development of the Company has therefore led to its expansion by constructing new buildings and offices. Also ancillary services has been created, such as a nursery, a canteen and a residences for workers.

This project was carried out by the Olivetti family and some of the most famous Italian architects and urban planners of that period. It was made possible to develop an original model of community in an industrial city, based on the economic, social and cultural well-being of workers.

Nowadays, Ivrea represents the greatest example of innovative development based on the collaboration between business and workers contributing to the welfare of local communities.

Prehistoric pile dwellings around the Alps

The prehistoric pile-dwelling sites consist of a series of 111 archaeological sites located in six different countries of the Alps (Switzerland, Austria, France, Germany, Italy and Slovenia). They are part of the Unesco World Heritage since 2011.

These places, located in water areas, are composed of the remains of prehistoric settlements, in the form of stilts and organized in real villages. They are dating back to a period ranging from the years 5000 to 500 BC.

Furthermore, the exceptional conservation conditions made possible to document the lifestyle and customs of the first populations in the Neolithic period.

In Piedmont there are two of these UNESCO World Heritage sites:

During the latter’s excavations, ceramic and also ornamental objects were found, as well as tools and wooden artefacts.

Have you ever been to one of these places? In your opinion, are there other sites in Piedmont that deserve to be included in the Unesco World Heritage List? Which ones?

If you are curious to know our activities in Piedmont

and find out which experience will suit you!