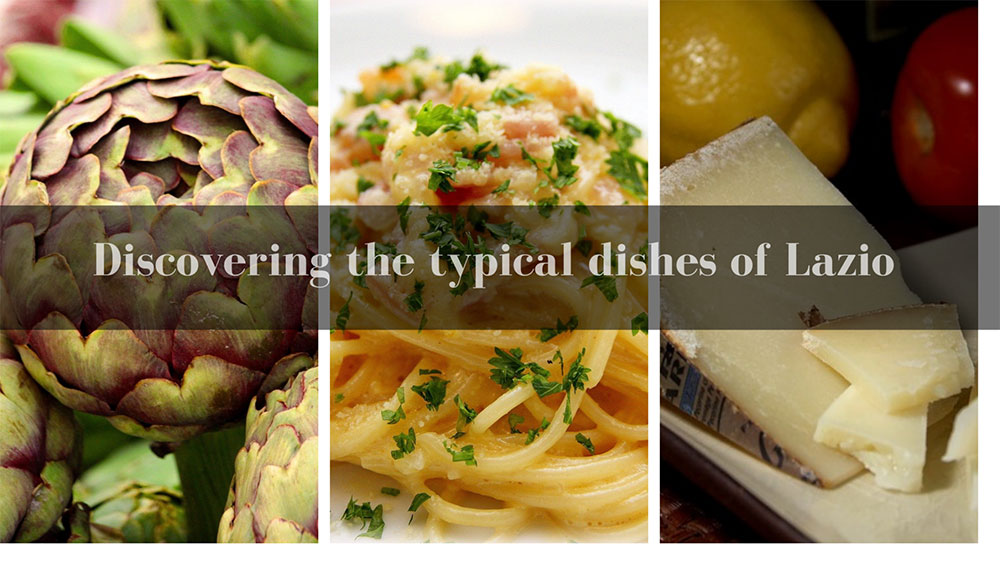 Discovering the typical dishes of Lazio

Are you gourmets always looking for new dishes to savor during your travels or to replicate in your kitchens? If you are looking for good food and special recipes, Lazio is the right place. In this article, we will discover the most famous typical flavors of Lazio cuisine.

Lazio boasts a priceless history and historical-artistic heritage, just think of the cities of art that are there. Among these: Rome, the capital of Italy, rich in monuments dating back to the period of the Roman Empire, and Viterbo, also known as the city of the Popes. These two cities, together with all the others, make this region one of the main destinations favored by both Italian and foreign tourists. In addition, its scenic beauty makes it one of the most popular areas in Italy. The kitchen also offers many typical Italian recipes of traditional dishes characterized by many different flavors and stories.

Below you can find a list of some typical Lazio dishes that are well known and absolutely to be tasted.

Many try to emulate and redo the famous pasta alla cacio e pepe but without succeeding. There are some tricks that, in fact, will reveal the DOC Romans.

One of the first must to respect in the preparation of this first course is pepper: it is essential that it is in grains and that during preparation it is pounded in its mortar with a rotating movement and then toasted in a large pan. Finally, the pepper should be “stretched” with the pasta water. Two ladles of water should be enough to make it melt slightly.

The second trick is hidden in pecorino. It is very important that the pecorino used is 100% Pecorino Romano and well seasoned. It should be grated well and mixed with a little cooking water in a glass bowl until a pasty consistency is obtained.

This mixture will then be added to the last one in the pan with the drained pasta. In this way, you will get the real tonnarelli with cheese and pepper.

Slices of veal, raw ham, sage, wine and butter: these are the ingredients at the base of one of the tastiest second courses in Rome and appreciated throughout Italy.

It seems, however, that the famous saltimbocca are not really originally from this area, but it seems that the first apparitions are located between Lombardy and Veneto. The real boom of this dish, however, dates back to the 19th century in the capital: this is why they have become a symbol of Rome. They later spread throughout the peninsula and even abroad. Spain and France are big fans of this dish.

But where does the name of this recipe come from? It seems that it is almost a nickname given to him. In fact, these slices of meat with ham and sage, seasoned with a sauce made up of butter and white wine are so good that you seem to want to jump in your mouth!

Typical Roman dish, with a season that fluctuates from January to May due to the seasonality of the artichoke, the Carciofo alla Giudia represents not only a traditional recipe, but also the history of an entire district of the city of Rome.
Its roots go back, in fact, to the papal bull of Pope Paul IV of 1555, when the Ghetto of Rome was created, that is the neighborhood where all Roman citizens of the Jewish religion had to reside.

Here, a very particular culinary tradition was also born and still handed down and appreciated today. Among the most famous dishes, we find the Artichoke alla Giudia, which is artichokes of the “mammola” type – typical of the Lazio region – fried twice in olive oil, served in the shape of a rose and seasoned with salt and pepper.

The “mammola” artichoke is very particular: in fact, it grows only in this area, has a rounded shape, and has no thorns.
Traditionally, this dish was eaten to celebrate the end of Yom Kippur. Some people argue that this side dish is also very popular during the Pesach celebrations, that is, the Jewish Passover.

Its name derives from the way Roman citizens not residing in the Ghetto used to indicate this complex preparation.
In conclusion, the cuisine of the Ghetto is not only Carciofi alla Giudia. In fact, we can appreciate the famous ricotta cake, dry biscuits, fried stuffed courgette flowers, cod, and much more.

Pasta alla Carbonara is today one of the symbolic dishes of Italy of taste, but it seems that it originally appeared for the first time in Lazio.

Many legends have followed one another to tell the story of this extraordinary dish. In our opinion, the most popular is the one that traces its origins to the preparation of the charcoal burners’ lunch.
It is said, in fact, that the ease in finding the ingredients (bacon, egg, pepper, and pecorino) made this pasta the cheapest and simplest dish for workers.

However, there is no certainty about the origin of this particular dish.
Some, in fact, argue that before 1944 there is no evidence of this dish, thus tracing its invention to the arrival of the Allies in Italy. This is because the Americans brought pancetta to the Bel Paese, making the Italians appreciate its particular taste.

Nobody knows what its origin actually is, but one thing is certain: it is undoubtedly one of the most popular Italian dishes in the world.

Recently, the town of Amatrice, in the province of Rieti, has become well known for its homonymous specialty. Here, in fact, the real Pasta alla Amatriciana is born, made up of three main ingredients: guanciale (exclusively guanciale!), Tomato, and pecorino.

It seems that this recipe can be traced back to 1600 thanks to some discoveries. But be careful that the origin of this dish seems to be a peasant and its recipe has been handed down orally from generation to generation.
But let’s come to reveal some secrets of this recipe! First, the iron pan is indispensable.

Moreover, we have, as mentioned before, the bacon. In fact, it is this ingredient that will help your pasta to be savory at the right point. In addition, its fat is what melting will keep the flavor of the perfect sauce. Also, the use of oil is not envisaged. In the ill parade, you can use a little lard to brown the bacon in a pan.

Finally, the real binder of the ingredients is pecorino: 100% pecorino romano!

These are just some of the many Lazio dishes known and renowned all over the world. Which of these is your favorite?