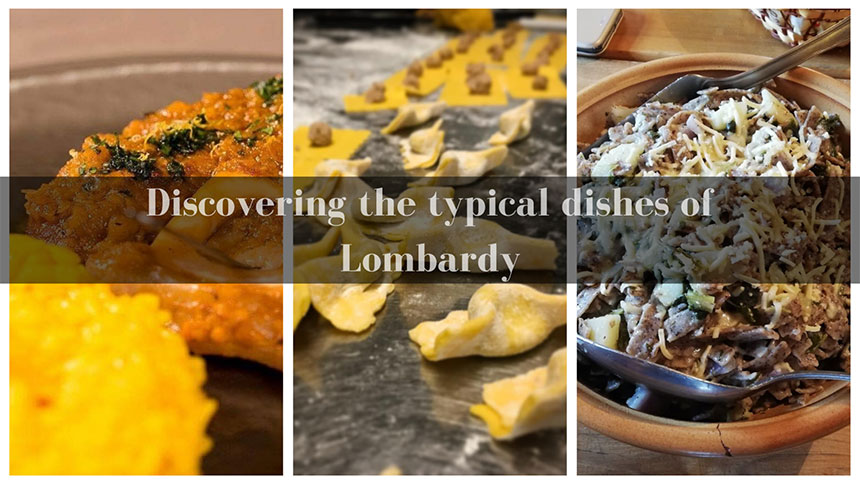 Discovering the typical dishes of Lombardy

Are you planning a new trip in Italy as soon as it will be possible to do it safely? Are you foodies always looking for new plates to savor during your journeys? So, if you are looking for delicious dishes, Lombardy is the right place. In this article we will discover the most famous traditional flavors of Lombard cuisine.

Lombardy boasts a priceless history and historical-artistic heritage, as well as scenic beauty that coexist in a single region: lakes, rivers, plain, mountains and more.
Even the Lombard cuisine offers many local products that permit to create traditional and unique dishes made of many flavors, very different from each other.

In this article, we will present you seven typical dishes of Lombardy, among the best known and absolutely not to be missed.

If you visit Milan, you must taste the Milanese risotto, a timeless classic of Milanese cuisine, appreciated both in Italy but also abroad.

The legend says that the creation of this delicious plate dates back to the second half of the 1500s, linked to the construction of the Milan Cathedral.

Valerio di Fiandra, a Flemish Master came to Milan for the realization of the marvelous windows that we still have the opportunity to admire through guided tours. Together with him came also his pupil, named Zafferano (in english Saffron). His nickname was given for his habit of using this spice to obtain brighter colours. One day, the Master told the young assistant that by continuing in that way he would end up putting saffron even on the plates.
On the occasion of the wedding of the Master’s daughter, Zafferano asked the Chef a “small” variation in the wedding menu: add a generous pinch of saffron to the rice.

The result? All guests appreciated the change made, both for the colorful note that made the dish a bright yellow as well as for its taste. Was it a simple joke or a spite? This we are not given to know, but we like to think that it is not a simple legend.

Nowadays, Milanese risotto is served in different ways and variations, both in traditional and innovative ways. The most popular variation is certainly the risotto served together with the famous Milanese ossobuco, another typical dish of Milanese cuisine.

Also known as “òs bus” (pierced bone), in the Milanese dialect, the first transcriptions of the veal ossobuco recipe date back to the 19th century. Someone says that its presence dates back to five hundred years earlier.
In fact, already at that period there was talk of a particular transversal cut of the meat with the bone containing the marrow and stewed for many hours. This kind of meal was so much appreciated by the aristocracy of that time.

If you are curious to savour this plate, you must stop for a lunch or dinner at La Dogana del Buongusto Restaurant in Milan.

When you stop in Bergamo and Brescia, you absolutely must taste a good plate of casoncelli, in local dialect called also “Casonsèi”. This is one of the most popular dishes linked to Bergamo and Brescia tradition, in addition to polenta.

It is a particular type of fresh filled pasta and despite having the same name, the casoncelli from Bergamo are different from those from Brescia. The Bergamo casoncelli have a thicker dough with a meat and cheese filling. During cooking, they are then seasoned with crispy bacon, butter and sage. On the other hand, the Brescia casoncelli have a thinner dough that is able to highlight the filling based on dry bread, butter and parmesan. In this case, after cooking, they are seasoned with butter, sage and parmesan.
Nevertheless, this dish of poor origin, was born from the need to reuse the leftovers of beef and pork to avoid waste.

If you want to taste a plate of handmade casoncelli, you must stop at the Aurora Hotel & Restaurant . This romantic place is located in Castione della Presolana, in the Bergamo mountains of the Val Seriana.

If you are planning to visit Valtellina, you have to stop and taste a delicious plate of Pizzoccheri accompanied by a glass of local wine. The main ingredient of this dish is buckwheat flour, originally from this region.

The origin of this meal doesn’t indicate any specific date. A series of culinary references dates the late 1700s, concerning the Canton ​​Grisons in Switzerland, of which Valtellina was part of that time. In fact, the author of this book speaks of a dish called “Perzockel” as a sort of noodles made of buckwheat. Once cooked, this pasta was seasoned with butter and local cheeses.
Furthemore, from the 19th century, some dishes most similar to the one we know, started to be served in Lombardy on the tables of the wealthiest farmers. The only difference was the addition to the ingredients mentioned above, of potatoes, cabbage or ribs.

Nowadays, Pizzoccheri are considered one of the main symbols of Valtellina. They found their epicentre in the small village of Teglio, where an emotional bond has been established with the local population. As a result of this relationship, they leading them to form the Pizzocchero Academy of Teglio.

All local restaurants of this area cook this amazing plate in full compliance with the original certified recipe and with all top quality Valtellina products. You can taste them at Agriturismo Il Vecchio Torchio in Teglio.

Among the gastronomic excellences of the Mantua area, home of the Gonzaga Family, there is the famous pumpkin tortelli.

The origin of this plate dates back to the Late Middle Ages, when this tasty dish was invented from the need to recycle kitchen leftovers. Furthermore, it’s also for this reason that very different flavors are combined: the sweet of pumpkin and amaretti mixed with mustard and Parmesan cheese. It’s precisely this common thread that creates the perfect balance between its sweetness and flavor, prepared with the four typical ingredients of the Mantua area.

Casseoula is a Lombard winter meal prepared especially in the provinces of Varese and Brianza.

Its name is of dubious origin. Someone says it’s linked to the kitchen utensils used for its preparation:

According to tradition, this plate was ate during the festivity of Sant’Antonio Abate, on January 17th. This is the day that marks the end of the pig slaughtering process.

On the other hand, legend says that its birth coincides with the period of Spanish domination in Lombardy, at the end of the sixteenth century. On this period a young Spanish soldier falls in love with a young Lombard girl, who worked afor a noble Lombard family. The soldier taught her lover how to prepare this meal and, later, she proposed it at a banquet; her employers and their guests appreciated it so much that they spreaded the recipe of this succulent dishes across Lombardy.

Today, casseoula is mainly cooked in the winter. In fact, the ingredients used (pork scraps – feet, tail, ears, rind) combined with cabbage, make this dish perfect for cold and foggy evenings in Lombardy.

If you stop in Cremona you absolutely must taste the famous nougat, a typical Christmas dessert made with egg white, honey, sugar and almonds.

Its origins are doubtful: someone explained that during 12th century a man from Cremona translated an Arabic text explaining how to cook the “turun”. For others, the arrival of nougat in Italy is due to the court of King Federico II and his Arab cooks. Its Arabic derivation is almost certain.

In Italy, there’s a specific date that designates the official birth of the Cremonese nougat: in 1441. In fact, in this year, Francesco Sforza and Bianca Maria Visconti got married and served nougat to their guests.
Today, this dessert is one of the most tasty and popular dishes of Lombardy. Moreover, it’s also a well-established tradition that is celebrated every year in November with the dedicated fair, named Festa del Torrone.

These are just a few of the many dishes of Lombardy known and renowned all over the world.
In the next articles we will discover many more!

Discover our experiences dedicated to Food & Wine Lovers and ENJOY!